Football’s an unpredictable game at the best of times but it’s hard to see past a Liverpool win in this afternoon’s derby, with Sadio Mane looking a good bet to be among the goals.

With not just one eye, but West Ham’s entire focus seemingly on this week’s Europa Cup semi-final, a side weakened by the resting of Bowen, Antonio and Rice and with one just fit centre-back available looks vulnerable this afternoon at Chelsea.

Timo Werner looked as if he was on his way out of Stamford Bridge prior to a 15 point haul at Southampton and can make up for some errant finishing with an assist or two.

It’s been an unusual season. Defenders have come to the fore with seven of the top 12 scoring players –

prompting calls for a  rule change to allow new formations for up to seven defenders, including keepers.

One player not in the above elite is Chelsea’s Reece James, but this can be put down to an injury prone season.

The Blues four goal home loss to Brentford has led to some revising their reliance on the likes of Rudiger and Co, but the writer sees this as an aberration rather than the start of a slide – shipping five at home to West Brom last season was followed up with three clean sheets in their next four matches.

and arguably Watford have the easiest run-in with four home ties against sides in the bottom half of the table,starting with today’s game v Leeds.

Allied to Roy Hodgson shoring up the likes of the Hornets rearguard, now might be a good time to bring the likes of Kamara,

The schedule for the FA Cup third round, staggered across this weekend from Friday through to Monday, offers the chance to double up on points from transfers with potentially high-scoring

followed by Tottenham v Morecambe and

Liverpool v Shrewsbury both at 14.00hrs on Sunday.

TFF provides the opportunity to make transfers right up to the published time of kick-off, (subject to a gap of two hours before any earlier kick-off time)

thereby taking out the need to second-guess Tuchel and Conte’s team selections.

The likes of Harry Kane are invariably rested, giving reserves such as Carlos Vinicius the chance to step in and amass high scores – the now-departed Brazilian scoring 17 pts by way of a first half-hat-trick at non-league Marine last season.

join AFCON participants Salah and Mane (Liverpool) and Mendy (Chelsea) as the most notable absentees from TFF in the weeks ahead. The full-list of PL players called up for AFCON is

Watford’s Emmanuel Dennis however remains at home after Nigeria missed the deadline for calling him up and his stay could prove to be a boon for TFF managers with the Hornets facing upcoming matches against each of the bottom three this month.

Team-mate Ismail Sarr has been ruled out by his club due to injury until February.

Clean sheets from high value Brentford defenders have provided the backbone to writer’s best performing side – no pressure2, (3,978 place, 4 transfers) prior to today.

Predictably, their last three matches have seen their rearguard breached by Liverpool, Chelsea and Leicester – hence jettisoning Henry (£2.5m) for Rudiger (£3.8m) before the last gameweek.

Bees’ keeper David Raya (2.7m) is now out for up to five months through injury so will need replacing, but  Frank’s men now face lesser tests against Burnley (a), Norwich (h) and Newcastle (a).

A defender to bring in is Livramento (Southampton) whose low price tag (£2.4m) makes him one of the best value defenders in TFF at 14.17 pts per £million, see player guide page for full stats.

His anticipated game time is higher than top value Chalobah at Chelsea (16.4pts/£m) though given Saints predilection for the occasional nine goal mauling, TFF defenders may wish to hold onto their hats when they come up against Liverpool and Leicester.

Worth monitoring is another from the Stamford Bridge parish –  Kurt “thou shalt not pass” Zouma. His introduction to the West Ham backline has brought two successive PL clean sheets after three in 19.

Factor in the added protection of Soucek and Rice in front of him….

But TFF managers may wish to hold fire given some tough upcoming fixtures for the Hammers.

If it ain’t broke, don’t fix it. Ignore this adage at your peril in TFF, with the writer’s decision to bring in Lukaku for the PL’s joint-leading scorer Jamie Vardy ahead of Chelsea’ s home fixture against Southampton costing him 10 points since.

It could all have worked out so differently had injury not forced the Belgian out of yesterday‘s goal-fest against Norwich and likely upcoming fixtures against Newcastle and Burnley before the next international break.

So who to bring in for him now?

Vardy? Ronaldo? Or the most popular forward, Antonio, included in 35% of teams?

The writer’s plumping for Harry Kane, who could just be running into some scoring form after a goalless August and September. He’s been dropped from 24% of teams since pre-season (40% to 16%) but he’s still the same player who topped the TFL charts with 232 points last season

Last week, the writer made his first transfer to his high-flying Nopressure2 team, lying in 1,795 place prior to today’s games.

Watford’s Ismael Sarr – a midfielder in the world of TFF though he plays further forward – looks a good bet to outscore Burnley defender Charlie Taylor (Burnley) by the season end. And the swap paid instant dividends, with Sarr popping up to score at home to Newcastle and net 8 points to Taylor’s 1. If only it was always this easy!

On the subject of transfers,

figures released by the Telegraph have revealed some startling figures for the amount made by the game’s current frontrunners.

Slow and steady wins the race, so the saying goes, and the writer prefers to keep his powder dry to in a bid to score as highly as possible in the rankings for the season as a whole.

He’s selected five teams – but has no Ronaldo or Lukaku in any.

And his highest flying side –  Nopressure 2– is based on a keeper and 3 Brentford defenders who have provided terrific value thus far but now face tricky upcoming fixtures at West Ham (a) Chelsea (h) and Leicester (h).

Nopressure4 is also based on a Watford rearguard yet to keep a clean sheet despite arguably one of the easier starts to the season.

Hence, the temptation to jump on the Chelsea bandwagon and bring in some Blues defenders, looking good for three or four clean sheets from Southampton (h), Brentford (a) Norwich (h) Newcastle (a) and Burnley (h)

Be mindful of rotation from Tuchel though – Alonso has been a regular starter for Chelsea in the Premier League this season, but the writer can’t see the Chelsea boss continuing to side-line fellow left-back Ben Chilwell for every PL game.

Aided, perhaps, by the absence of Aubayemang and Lacazette from the Arsenal side,

one of the writer’s five teams –

a mix of Brentford defenders, value midfielders and top scorers –

is sitting pretty in 72nd place with 83 points before Sunday’s matches. 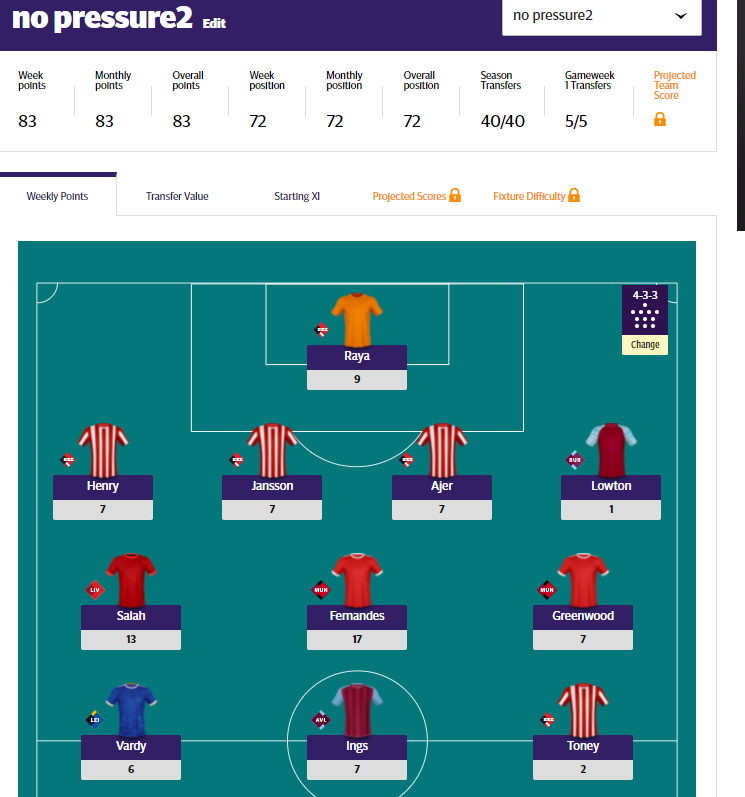 The following are all rated at least doubtful for the opening fixtures. With transfers coming into effect from tonight’s game, managers may wish to jettison the following

Andone (back after serious knee injury)

Castagne – to be assessed

Cavani, Bailly (to be rested after Copa and Olympics)

Wilson, Saint-Maximin and Almiron (all doubtful)

Hughes (out of contract) Perica, Success, Gray (all linked with moves away)

Boly, Jonny, Neto (all out)

Looking for an edge over your mates in the mini-league. With just two days left before the big kick-off on 13th August, look no further for some food for thought.

Firstly the easy (easier!) part. Seasons past have shown that the top scorers in TFF are, in the main, drawn from highly-valued forwards and attacking midfielders.

Casting his eyes away from an in-limbo Harry Kane, until his future is resolved at least, the writer is hoping for

Bruno Fernandes – his stats for a midfielder are on another level –

cheaper Mason Greenwood, who should get more minutes in the absence of the injured Rashford and Martial.

Combine these with under-valued players on the cusp of a rapid improvement and….

All the promoted sides are, as ever, tipped to go straight back down. But Watford’s Sarr and Toney at Brentford could well follow in the footsteps of Pereira at West Brom (141 points for £3.7m last season) to provide value.

Everton and Watford arguably have the easiest opening six fixtures of the  campaign.

The defensive-minded Rafa Benitez will be overseeing matches against an Ing-less Southampton, Burnley and Norwich at Goodison and a low-scoring Brighton away, and should be able to avoid the fate which befell Ronald Koeman, out of the door in October 2017 after facing four of the previous season’s top six.

Ben Godfrey had a slow start to his Everton career but was the top scoring defender in the last six weeks of last season and can supplement points for clean sheets with goal assists.

Conversely, managers may wish to give Norwich defenders a wide berth for their first three fixtures – Liverpool (h) Man City (a) and Leicester (h).

The introduction of a point for every two successful tackles has now made defensive-minded midfielders enticing low-value options. See the box-to-box Soucek as a nice combination of offensive and defensive, whilst Ndidi (Leicester) and Bissouma (Bri) have been amongst the top tacklers according to the official Premier League website.

From back to front

Inspiration can be drawn from TWO time winner, Adrian Frost, and his winning line up from 2018-19. (analysed in depth on the FISO website)

Built on players exclusively from Liverpool and Man City bar one, Southampton’s Redmond, the following team found themselves in the top 1000 in December with zero transfers made:

But with £50million to spend on 11 players, how could he afford such a team?

Whilst City had finished the previous season as champions, the Reds – with van Dijk signed mid-season – had trailed 25 points behind in fourth.